Our local Intergroups are providing updates on Meeting and Events changes due to COVID-19. Other resources are coming online to support AA Members and the alcoholic who still suffers.

Here are a few links that may be of interest at this time:

Greater Seattle Intergroup. Additionally, GSIG is now holding virtual meetings in cooperation with the Groups they serve. More information can be found here.

Eastside Intergroup  has information on meeting changes and virtual meetings.

Area 72 also has information of interest. Here is a link to the Area 72 website.

AA.org also has updates on COVID-19.

The Silver Lake Study Group has service openings for Literature Chair and Alternate General Service Representative. If you are interested in either position, please attend the next Business Meeting on March 17th at 6:00 PM in Portable C-1. 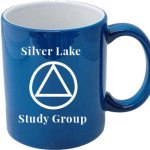 The next Business Meeting for the Silver Lake Study Group is Tuesday, February 18th at 6:00 PM.

We hope to see you there!

The December Business Meeting of the Silver Lake Study Group has been cancelled.

The Business Meeting for the Silver Lake Study Group will be held Tuesday, October 15th at 6:00 pm in Portable C-1.

I hope to see you there!

This group originated as the North Bothell Study Group in September 1981 and was then renamed in 1983. The group as meeting on Mondays for the Big Book study, and on Fridays for the Twelve Steps and Twelve Traditions study up to 1993. Their growth led to a move to the Advent Lutheran Church on 132nd St.

However, the Lutheran church could only accommodate them on Mondays and Tuesdays; Fridays were not available. So the Twelve Step and Twelve Traditions night moved to Tuesday.

Some of the group decided to stay at the St. Francis church, and started the Mill Creek discussion meetings.

To continue Friday meetings they started a podium meeting at the Grange on Seattle Sill Road. Meetings started with someone speaking for 20 minutes followed by a discussion meeting. The last Friday featured one or two speakers for the entire meeting. After about one year, they moved to the Hope Luthern Church for the Friday meetings.

Silver Lake Study Group was heavily involved in service work, in the 90’s both in the 19th District, the jail and reformatory meetings and on the Everett Conference Committee.

The Advent Lutheran Church moved in 2001 and the had to move to the Mountain View Community Church further east on Seattle Hill Rd.